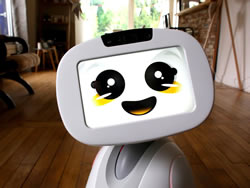 Robot makers Jibo and Blue Frog Robotics are creating social robots that are aimed at living with humans and in order to entice consumers they are selling them for about the same cost as an iPhone.

But these companies are also promising consumers that these little live-in robots are going to become the biggest platform since Apple’s iPhone, capable of performing all kinds of functions via apps.

“It’s like the iPhone, if we want to reach the mainstream and have success we need many very interesting apps,” said Frack de Visme, the chief financial officer of Blue Frog Robotics.

“We are going to have an open system so many developers can develop and create amazing apps so that it become mainstream.”  Cont'd...