In celebration of Manufacturing Day 2016 students learned about the role of robotics in manufacturing, and how robots and robot systems are designed and built

AUBURN HILLS, Mich. (October 10, 2016) - ABB hosted 13 Oakland County students at its Auburn Hills North American robotics headquarters and manufacturing facility Friday, October 7th as part of Manufacturing Day 2016. The students learned about the role of robotics in a wide variety of industries, and observed firsthand how robots and robot systems are designed and built. Manufacturing Day has been celebrated nationally on the first Friday in October since 2011, and is intended to inspire students to pursue a career in manufacturing and develop a skilled trade.

"This event was a great success, as we had the opportunity to connect with members of our next generation of skilled manufacturing workers. The students really enjoyed seeing all the robots, including YuMi®, ABBs new dual arm collaborative robot. They were also surprised and excited to see that we manufacture robots and robot controllers in our Auburn Hills factory," said Christelle Keefer, director of training, ABB Robotics.
ABB is one of 40 Oakland County manufacturers who hosted tours, giving participating students the opportunity to see the operations of businesses in industries that closely match their interests. Over the course of the day students also learned how to get the training needed to qualify and excel in the many manufacturing job opportunities available in Oakland County. All students are enrolled in the Engineering & Emerging Technologies program.
About the ABB Robotics in Auburn Hills:
• In May 2015 ABB announced that it is to start producing robots in the Auburn Hills, making it the first global industrial robotics company to fully commit and invest in a North American robotics manufacturing footprint. The new plant is ABBs third robotics production facility, alongside Shanghai, China, and Västerås, Sweden, and will manufacture ABB robots and related equipment for the North American market. 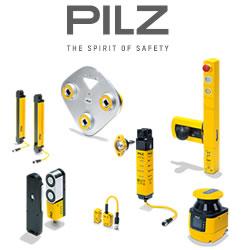 Pilz Safety sensors for industrial use

Pilz offers a wide range of safety sensors that conform to international standards and have been tested by certification bodies. Our sensor technology portfolio includes safety switches for monitoring positions, as well as guards. Optical sensors are ideally suited for area and zone monitoring. Choose from our wide range of light barriers, camera systems or tactile sensors, such as pressure-sensitive safety mats. Use our safe sensors in conjunction with our safe control technology! What you'll get from Pilz is an economical and safe complete solution. As well as being able to guarantee high efficiency for plants in an industrial environment, it is also especially important for us as a sensor manufacturer to protect humans, machinery and the environment.
More Products
Feature Your Product