When thinking about costs of a part, many engineers and purchasers tend to only have one thing in mind: production costs. Like this, new technologies such as 3D printing/AM are often seen as expensive. However, production costs are just the tip of the iceberg.

When thinking about costs of a part, many engineers and purchasers tend to only have one thing in mind: production costs. Like this, new technologies such as 3D printing/additive manufacturing are often seen as expensive. However, production costs are just the tip of the iceberg. Other important factors are hidden and more difficult to evaluate. This includes metrics such as quality, reliability and flexibility. To understand the real cost of a part it is necessary to uncover the invisible and look at the total cost of ownership (TCO). TCO describes all direct and indirect costs throughout the entire lifetime of a part – from design, purchasing, shipping, production, logistics & inventory, returning… the list continues. This makes it more complicated to define, but also the most accurate metric to compare certain production technologies, such as injection molding and 3D printing.

The ‘rule of 10’ states that for each stage of assembly a design defect is not detected, it costs ten times more to find and resolve. This makes it highly necessary to get the design right within the first step. If a mistake in design happens using injection molding, the created mold has to be changed, already produced and stored parts have to be scrapped, and production has to start from the scratch. This certainly is not the most efficient and sustainable process.

3D printing is seen as a revolution in design and prototyping. Design changes can be arranged quickly and without the costs of creating new tools. Moreover, it can work on-demand, just producing the number of parts that is needed, consequently immensely reducing the cost impact of a design mistake in the different stages.

To define production costs, a look at fixed and variable costs is necessary. Fixed costs describe investment costs such as for tooling and molds. Variable costs on the other hand appear per part, e. g. energy costs and salary. Overall, the costs of production change are drastically depending on the production volume.

Fig. 1 shows a schematic comparison of the costs per unit between injection molding and 3D printing, depending on the production volume. It illustrates a well-known fact: the lower the volume, the more competitive 3D printing is. 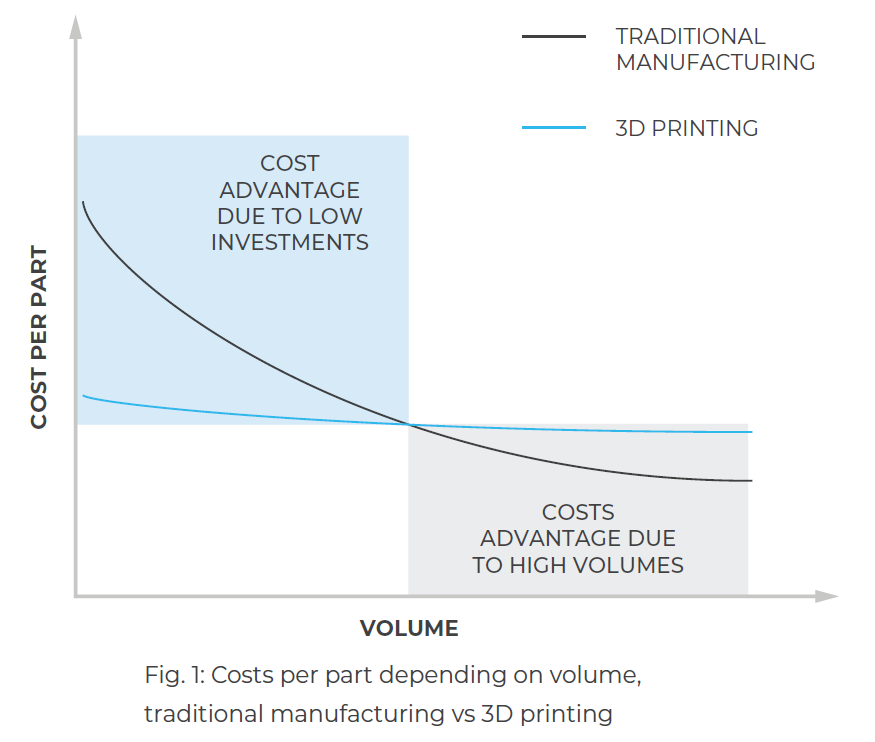 Injection molding requires relatively high initial investments in tooling and operating equipment. Once the initial investment costs have been amortized, traditional manufacturing will generally become more competitive, as the costs per unit continue to decrease with increasing numbers. 3D printing on the other hand only requires a 3D file. This results in lower costs per unit for small production volumes.

Supply chain related costs are part of the more hidden cost structure. With centralised production OEMs must consider shipping to where the part is needed, costly express shipments might be necessary, as well as handling possible disruptions in supply chain routes (a genuine eventuality as recent global events have proven). Moreover, cargo has to pass through customs, which can be a quite time-consuming affair. Alternatively, OEMs can employ a decentralised production strategy with several smaller manufacturing facilities placed globally. However, this requires further investment in machinery and labour. Minimum order quantities must be met to make production viable, so storage is required. Parts might get obsolete and have to be scrapped. With inventory costs typically ranging from 12% to 34% of total costs, the potential for savings is obvious.

Additive manufacturing combined with a digital inventory and decentral production can solve several supply chain challenges. A digital inventory eliminates the costs and risks of storage. Parts are available whenever they are needed and can be produced on-demand. With a decentral production network parts can be printed at the needed location. By this, 3D printing can not only produce substantial savings but can also mitigate supply chain risks.

There is one further aspect which, while not fitting neatly into the framework of fixed vs variable costs, still has a huge impact on process profitability: consequential costs. These are defined as costs that were not foreseen in the budget and may negatively impact break-even calculations. Specifically, consequential costs often occur as a result of a breakdown or other errors, and they are highly dependent on the lead time. One minute of downtime in the automotive industry can for example cost up to 22.000-50.000 Dollar, according to Thomas.

In such time-critical situations, 3D printing additionally plays an important role in mitigating the risk of delivery delays (due to an interrupted supply chain), as the part can easily be produced at any local print farm close to the consumer. Even for high-volume parts, where traditional manufacturing is generally the more cost-effective solution, setting up 3D printing as a supplementary manufacturing method might be economically attractive, giving the OEM the ability to react quickly in case of emergencies. Of course, to benefit from this, that the OEM will need the right partner with a network of reliable suppliers that work in industrial grade quality.

Reducing TCO with the help of 3D printing platforms

Thankfully, there are now companies that can undertake the whole process on behalf of OEMs. My company Replique for example offers an end-to-end solution for OEMs from design, qualification, digital storage and on-demand decentral production. For OEMs it’s worth doing a little research into available options to significantly cut costs using 3D printing. After all, who wouldn’t favour relinquishing the complexity of producing and handling parts to another party while at the same time variabilizing and reducing their TCO?

About Henrike Wonneberger
Henrike Wonneberger, COO and co-founder of Replique, part of the venture builder of BASF, which offers an industrial 3D printing platform that enables OEMs to provide parts on-demand anytime and anywhere to their customers through a global, decentralised and secured 3D printing network. 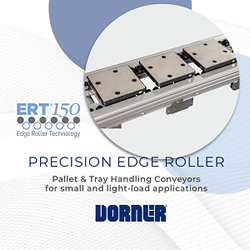