Q&A with PBC Linear: With lead screw accuracy up to 3x tighter than industry standard screws, and backlash control up to 4x better than traditional solutions, performance is improved and overall life extended.

Mark, tell us about PBC Linear and your position with the company.

PBC Linear is a global leader in linear motion with USA based manufacturing focused on producing differentiated products to solve customers most challenging applications.  As the Global Mechatronics Product Manager, I’m working with our team to drive key product developments that encompass the complete linear motion system. That includes not only the components, but the drive mechanism and controls as well.

With the rapid advancement in robotics and automation what new demands are being put on linear motion systems.

Assembly lines and production machines have the need to produce more efficiently at a faster rate, while lab automation, medical devices, and semiconductor handling equipment are a few of the applications that require greater precision and tighter tolerances.  At the same time, both sides of the spectrum are looking to extend the overall useable life of the system.

What type of advancements in motion systems are allowing manufacturers to improve and push the speed and accuracy of their systems?

In the area of precision lead screw manufacturing and the anti-backlash capability of the nuts, PBC Linear has focused investment into key process equipment and development into new technologies that address these needs.  With lead screw accuracy up to 3x tighter than industry standard screws, and backlash control up to 4x better than traditional solutions, performance is improved and overall life extended.

How is backlash of a nut controlled in a lead screw assembly?

Backlash is the amount of play or movement axially between a nut and lead screw.  This play directly translates to the accuracy of a linear motion system. The most common traditional method used to control backlash is to apply a preload with a multi-piece assembly that employs a nut with fingers that are closed by a collet sliding in the axial direction.  The collet is moved by a coil spring that pushes it laterally along the nut. This type of system can be effective at install, but due to the variable nature of the tension generated by the coil spring, it loses the ability to hold consistent preload within minimal cycles on the system.

A new solution from PBC Linear employs a patented design called Constant Force Technology.  It utilizes a banded spring and eliminates the use of a collet. This simplifies the design, reduces components, and changes the direction of force to be radial or in the direction required to close the nut fingers around the lead screw.  This direct and continuous closing ability translates to greater accuracy and greatly increased effective life of the overall assembly.

Can you give us an example of an application where Constant Force Technology is being used?

One great example is in the medical field where syringe pumps that are vital to dispensing medications require precise movement over the life of the equipment.  Imagine utilizing a screw that loses backlash control over time and affects the dosage of medication actually released. The effect on a patient could be life threatening.  Where traditional screws have failed, the PBC lead screws with CFT nuts have passed both the accuracy and life testing for these type applications with flying colors.

Why use an integrated screw motor assembly instead of a traditional coupler design?

Ultimately leadscrews are driven to produce linear motion for many types of automated equipment.  The traditional method to connect the screw to a stepper motor is to use an intermediate motor mounting option and coupling device.  While effective, this method cost more for the components required as well as in the time required to assemble them. Also, if there is misalignment between components, a number of problems can come into play as they deflect or twist to create a cam effect felt throughout the system or possibly even binding.  This can result in greatly reduced life of the overall actuator or ultimately catastrophic failure.

An alternative method is to mate the leadscrew and the stepper motor together via a laser welding process.  This process ensures alignment of the leadscrew with the motor and eliminates any cam effect or runout, thus improving performance and extending life.  With this method, the motor mount and coupler can be eliminated shortening the overall geometry of the assembly. In addition, utilizing an integrated screw motor assembly results in eliminating the cost of the components, assembly time of motor mounts, couplers, and labor. 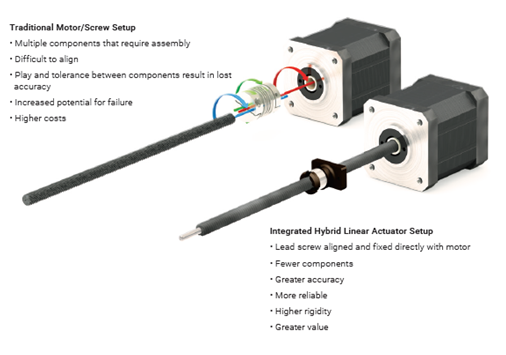 Tell us about the difference between an External and Non-Captive leadscrew and motor assembly? 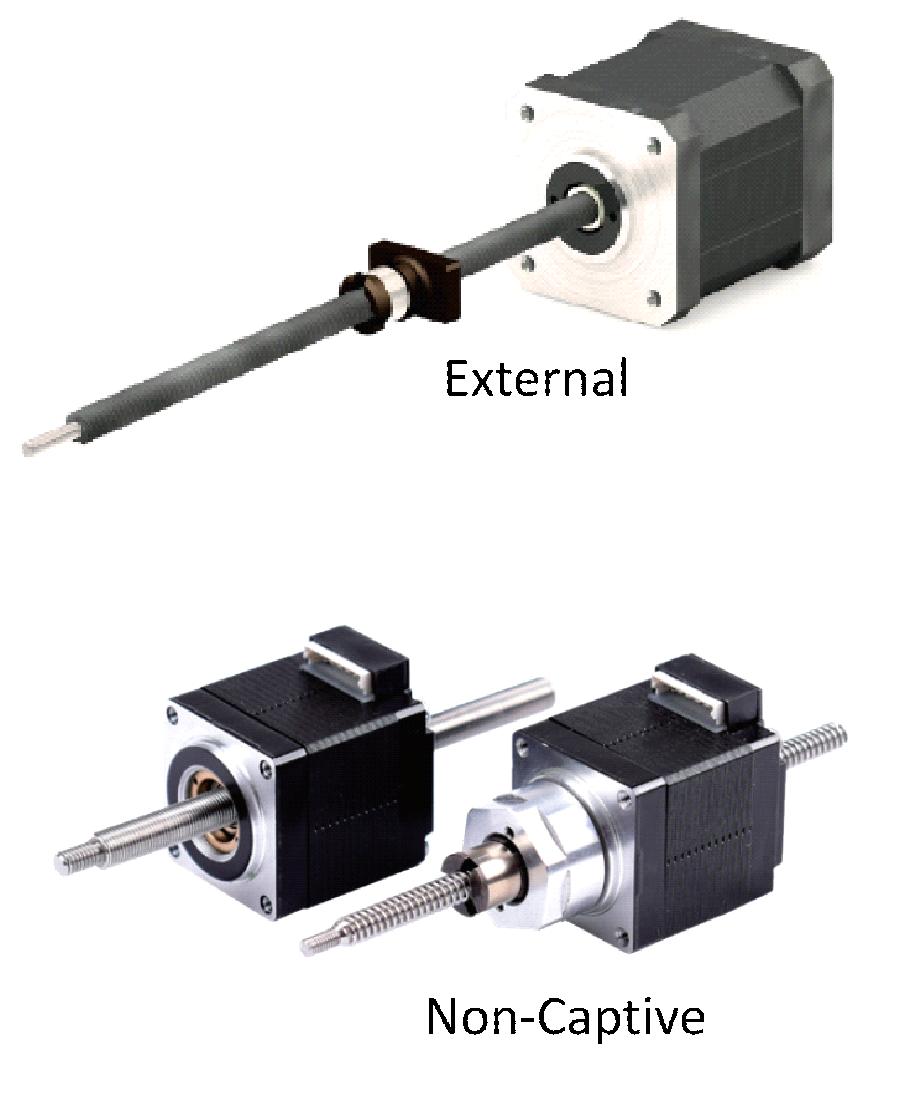 The External version of the leadscrew motor assembly is the most popular design and utilizes the integrated assembly described above where the screw is inserted into a hollow shaft motor and laser welded directly to the motor.  This fixes the screw in location and the nut creates the movement of something along the length of the screw. Short stroke applications usually do not require end support bearings for the screw, but as the design of the screw becomes longer, end support blocks with bearings are required to reduce screw whip, runout, or vibration from the “snow cone” effect.

The Non-Captive version creates motion in exactly the opposite manner.  The nut is fixed either internally or on the face of the motor, and the screw creates the movement as it is allowed to pass completely through the motor.  Normally, the motor will be mounted in place and the item being moved is affixed to one end of the screw.

Can you give us some examples on where a Non-Captive leadscrew would be used?

A good example of where using a non-captive actuator can be an advantage is when there are space limitations.  If accommodation can be made for the screw to extend out the back of the motor, the length of a given screw can be possibly shortened by the length of the nut while maintaining the same useable stroke. (see illustration below).  This means that potentially, using a non-captive can result in the shortest overall length of the assembly.

Manufacturers are demanding faster and more accurate systems, how is PBC Linear keeping up with these demands?

The best illustration of how PBC Linear is committed to developing industry leading and problem-solving technologies for customers is reflected in the two R&D test labs.  The first is configured to handle up to 124 actuators at a time and has the ability to adjust them each for a wide range of load, speed, orientation, and application characteristics.  The second lab is sound proofed and has the ability to collect data on performance along with sound levels for up to 30 individual axis. These facilities enable PBC’s dedication to continuous development to be put into action.