Randstad US today (July 18, 2017) released new research findings that contradict many reports that American workers fear losing their job due to automation. The 2017 Randstad Employer Brand Research found that only 14 percent of U.S. employees worry that automation will take their job away, and nearly one-third (30%) say they think automation will make their job better. 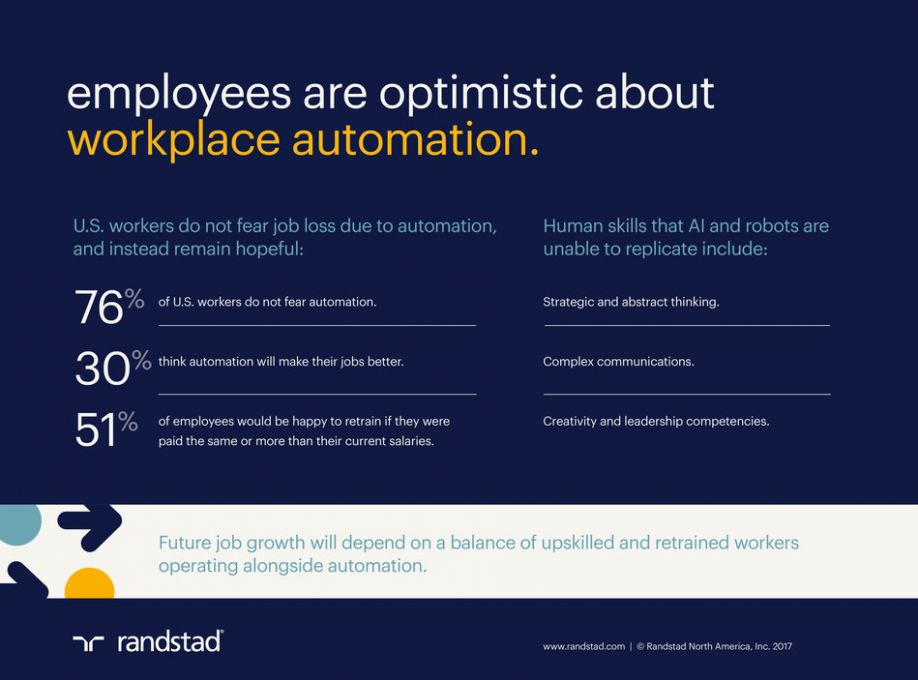 Alongside their optimism toward automation, workers also report a willingness to retrain or upskill to maintain their current job status.

Alongside their optimism toward automation, workers also report a willingness to retrain or upskill to maintain their current job status. In fact, the study found half of the respondents (51%) agreed they would be happy to retrain if they were being paid the same or more than their current salary.

"It is evident from our research that not only are workers not afraid of losing their jobs to automation, they are more than willing to retrain to leverage the efficiencies and benefits of artificial intelligence (AI) and robotics in the workplace," said Linda Galipeau, CEO Randstad North America. "These sentiments should be welcome news for companies as they seek greater adoption of automation to drive productivity and innovation. As we have known for quite some time, the success of organizations in the future will depend greatly on their ability to strike a balance between valuable human insight and interaction with technology.

"In addition, it has become necessary for today's employees and job seekers to continually cultivate, develop and update their skills to work successfully alongside AI and automation," Galipeau continued. "In conjunction with retraining and upskilling efforts, workers should focus on growing unique human skills that AI and robots are unable to replicate, such as strategic and abstract thinking, complex communications, creativity and leadership competencies."

Business leaders share the same beliefs as workers when it comes to the level of impact automation may have on the workforce. Based on a survey of C-suite and human capital leaders, Randstad Sourceright's latest Talent Trends survey finds that only 6 percent of U.S. respondents believe increasing automation will have a significant impact on workforce planning and shifting the talent needed.

Meanwhile, U.S. companies are enthusiastic about the potential benefits of automation and AI on their business, as evidenced by the following findings:

"The inescapable reality is automation and AI are here to stay, and will continue to grow substantially in the near future," said Galipeau. "As business leaders invest in digitization, automation, AI and other emerging technologies in the workplace, they must continue to evolve their workforce alongside these advancements. While the productivity and efficiency benefits of automation are unequivocal, the need for skilled humans to operate, utilize and advance technologies is equally unmistakable. And, we know that real connections aren't made from algorithms or robots, they require human involvement and irreplaceable abilities such as empathy, communication, engagement, intuition and instinct."

In an increasingly digital world, employers see the value of employees who demonstrate strong character and communication skills. To learn more, here are four ways to update soft skills in an automated workplace.

About the Randstad Employer Brand Research – U.S. Country Report
The Randstad Employer Brand Research is the most comprehensive, independent and in-depth employer brand research in the world, identifying the most attractive employers among thousands of companies. The U.S. research captures the views of over 5,300 respondents (general public, aged 18-65) through online interviews. It provides insights into the perceptions and drivers of choice of potential employees. The research, conducted since 2000, was done by Randstad's international research partner Kantar TNS. Respondents for the 2017 research were polled from November 25 – December 15, 2016.

About Randstad
Randstad North America is a wholly owned subsidiary of Randstad Holding nv, a € 20.7 billion global provider of HR services. Through its unique approach of delivering HR innovation with human interaction at the center, Randstad secures and manages a workforce of more than 100,000 people for thousands of clients each week. As a trusted partner in the post-digital world of talent, Randstad advances the careers and business success of our candidates and clients through a combination of the best of high-tech and high-touch processes.