A robots abnormal condition can be detected early via data comparison, so a high-speed equipment monitoring solution must be able to acquire analog signals at the rate of 1000 signals per second. Then the collected signals need to be delivered to the control room for monitoring management and data analysis.

In order to improve production efficiency and product yield, more and more manufacturers such as car, panel, wafer, metal, chemical, plastic, food and other fields began to implement robot applications by leveraging its efficient, durable and precise characteristics, resulting in the industrial robotic arm that plays an indispensable key role in the factory. However, when a large number of robots are introduced into the automated production processes, one major worry is that sudden equipment failure will affect productivity. In particular, the high-tech manufacturers have to run 24 hours non-stop production and any production line halt will bring a great loss. Therefore, collecting the robot information through sensors and identifying potential problems in advance have become the important parts of the stable production capacity.

For the high-tech panel manufacturing industry, robots are a fundamental tool to pick and place the heavy and fragile glass substrate. A world-renowned Taiwanese panel maker has six thousand robotic arms in more than ten factories across Taiwan to transfer and move materials, and the maintenance of robots occurred when failure happened or it was scheduled for its annual service. However, this approach is unable to determine the "health" status of the robot. Once an abnormal situation arises, it stops the production line or leads to insufficient production and late delivery. To address this, the company was looking for an equipment monitoring and early warning solution to immediately arrange the examination and repair when abnormality occurs, thereby optimizing robot utilization and lowering maintenance costs.

Since panel production requires several hundred processes, the company has at least a dozen robotic arms on each production line. A robot’s abnormal condition can be detected early via data comparison, so a high-speed equipment monitoring solution must be able to acquire analog signals at the rate of 1000 signals per second. Then the collected signals need to be delivered to the control room for monitoring management and data analysis. In order to avoid huge amounts of data tying up network bandwidth, the monitoring system must act as a relay station by providing a temporary storage function and allowing the system to regularly retrieve data at designated times. Although the factory’s area is quite large, its production line has limited space to accommodate additional new devices. As a result, a distributed data acquisition and streamlined hardware configuration was also incorporated into the project requirement.

By using APAX-5000 series products (including PAC controller, analog input module and backplane module), Advantech designed a robot monitoring and preventative maintenance solution to meet the high-speed data acquisition needs. The APAX-5580 has an integrated Intel processor that not only provides highly efficient computing, but also gives the control platform the flexibility to integrate a variety ofI/O modules. Through the 12-channel APAX-5017H analog input module, , it connects the Current Transformer (CT) on the six-axis robotic arm, the APAX-5580 is able to temporarily store the collected analog signals on its internal hard drive. The monitoring system in the control room periodically extracts the industrial computer data via the factory intranet according to the user’s set time (every five or ten minutes), thereby gaining detailed current fluctuation data and then analyzing whether the robotic arm is abnormal.

Unlike a traditional PLC which only handles simple logic functions, the APAX-5580 is a combination of high-speed data processing, large-capacity memory and storage space, standard Ethernet interface support and a wide range of modules connection, making it sufficient to undertake important data gateway tasks and use distributed configuration to collect a large number of front-end analog signals. Its PC-based open environment easily integrates with applications developed by users. The compact fanless design also means that the APAX-5580 is ideal for the space limited workshop. To simplify the amount of hardware, Advantech used the APAX-5002, dual-slot backplane module to provide a daisy chain function, to link multiple APAX-5017H modules without requiring extra devices (such as switches), while allowing the robot monitoring solution to maximize system efficiency with minimal hardware requirements. 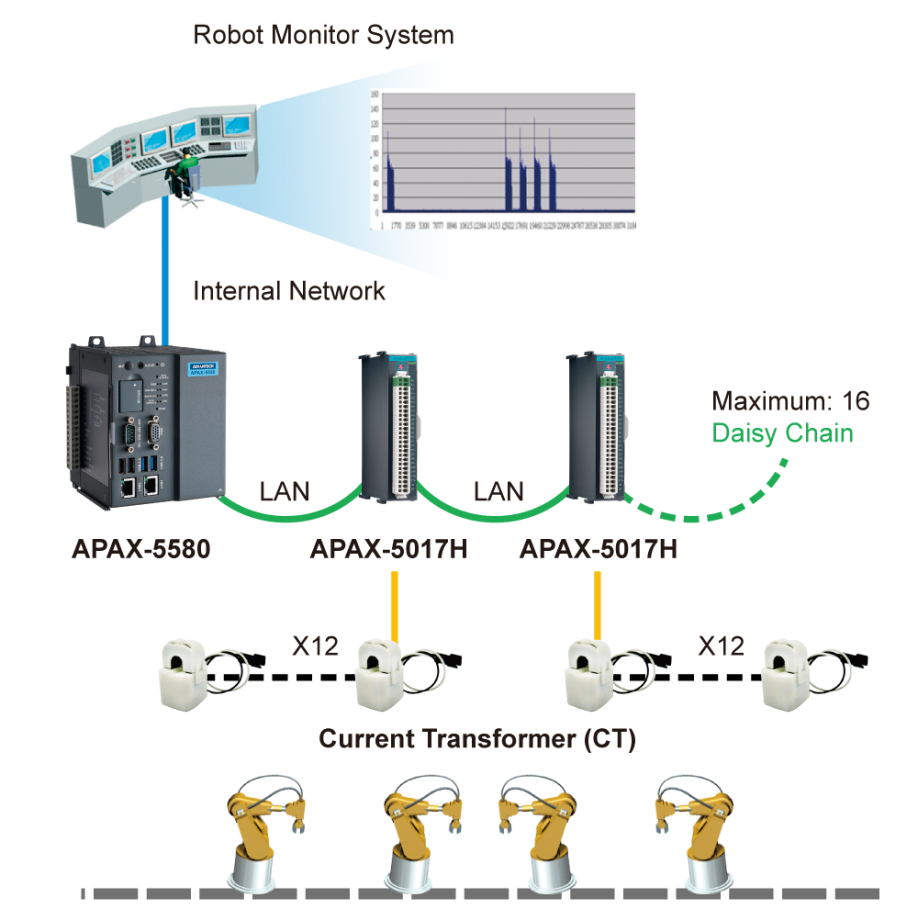 Advantech has years of experience in equipment monitoring and preventive maintenance, and has provided the relevant solutions for many semiconductor and high-tech manufacturers. Taking this panel maker as an example, it has already applied Advantech’s machine diagnosis and monitoring system in its factories, so the company also sought our assistance when it decided to implement the robot monitoring system. It is worth mentioning that the solution has accurately collected abnormal current signals during the project testing phase, and the robotic arm did not work after a few days, which made the company more firmly feel the necessity of introducing such a monitoring system. Furthermore, their approach to continue to use a robot until it is no longer serviceable will cost a great deal to replace. Compared to this, the early warning system enables users to spend less than 10 percent of the replacement costs on maintenance. Currently the company’s factory in Central Taiwan has adopted Advantech's solution to monitor more than 300 robotic arms, and the other factories will implement the same system to achieve.